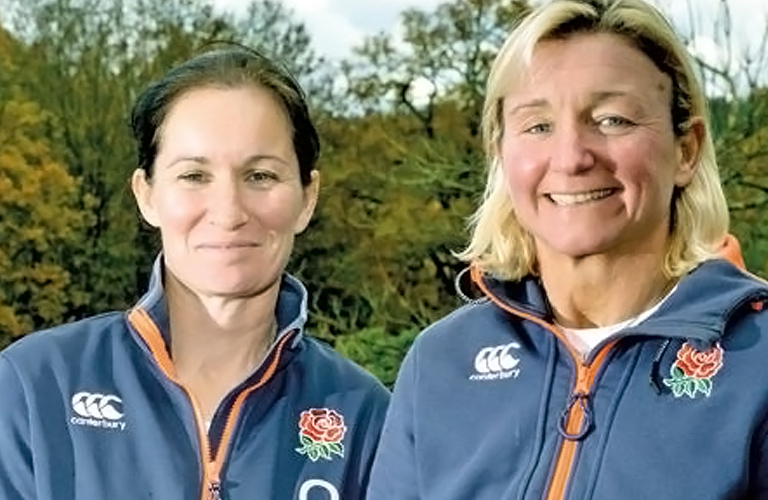 Says Appleby: “The drugs squad was very much about kicking the doors off and trying to find a stash, but that was the glamorous side of it. You work really hard in the police to try and put away drug dealers but it’s rare when you actually find that big haul.

“It is similar to coaching in a way. The massively satisfying wins don’t come along every day but it’s so rewarding when you get them.”

Since calling time on her career in 2005 having won 65 caps for her country, Appleby has been rising through the ranks as a coach. She is now head coach at Gloucester – Hartpury, who won their opening game in the new Tyrrells Premier 15s League.

“The fear of stopping playing was the worst thing. One day you’re an England player and then when you retire you feel like nothing. But the next best thing is coaching because you can give back to the game,” says Appleby, whose transition from playing international rugby to elite coaching has been helped by the fact that she hasn’t been alone on the journey.

Former England player Jo Yapp played in three World Cups for England, captaining them at the 2006 tournament, and is now head coach for the England Women’s U20 side as well as for Exeter University. Together with Giselle Mather, director of rugby at Wasps FC, they are the most qualified female coaches in the country having achieved their level four qualification through the RFU.

“Jo basically stole my shirt! I taught her everything I know,” jokes Appleby. “I was scrum half for England and then this young, amazing player called Jo Yapp arrived and took over. We played against each other, with each other and then coming up through the coaching route together has been great. We’re best friends and we chat all the time because we’re going through the same path.”

“Where we are with the level four I think is really testament to the way female coaches are appreciated in the rugby world.”

For Yapp, the chance to potentially inspire a new generation of female coaches is a matter of pride.

“If I can be a role model for other female coaches then that’s great because rugby has always been in my blood,” she says. “My dad was a coach and my brother and sister both played and as soon as I began at Ludlow RFC I was hooked.”

“The satisfaction I get from coaching is different. I get to work at both the elite and grassroots end of the game and seeing players improve is the most pleasing thing. My approach is about developing the person. Better people make better rugby players so it’s important to support them off the field to allow them to express themselves on it.”

It isn’t always easy balancing the demands of coaching at the elite level. Yapp’s two children can sometimes be found on the sidelines at Exeter University while she coaches, with injured players taking on the role of babysitters. But, as Appleby puts it, the end result is worth the challenge.

“It’s nice to think of us as leading the way as female coaches in the sport but we’re not doing it because we are females and we want to prove anything, we do it because we love it.” For the first time this season, the two old friends will come head to head as coaches when their sides meet this month (October) in the first game of the BUCS women’s league.

It will mark another landmark moment in the career paths of two exceptional coaches.

Want to get into coaching?

Find an RFU Coaching or Refereeing course near to where you live.