My life has always been associated with rugby, from growing up in a local club to playing at school to then graduating to senior rugby.

I have been associated with my club Old Bristolians since I was 9 years old. in that 46-year period I have supported played, captained and coached and now find myself as President.

In 2004 we started a mini & junior section and I, as a teacher, became coach & safeguarding lead. From those early beginnings we now have a flourishing cohort of 450 young players aged 5 to 18. In that time I moved on professionally from being a PE teaching Deputy Headteacher in a mainstream school to a successful Headteacher in the specialist sector of social emotional mental health.

I drew on this day-to-day experience to support my role as club safeguarding & welfare officer and I also supported our CB safeguarding lead in Gloucestershire. I was then invited to train as a Play it Safe deliverer, a role I have been doing since June 2018

In addition to my club role I am also a Developing Player Programme coach in the Bristol Bears Academy. My coaching has developed hugely as my knowledge from a professional standpoint has grown. 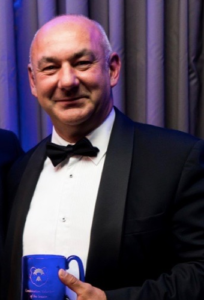 From my day-to-day role my understanding of neuroscience and how the brain grows has influenced my interaction with the children I teach but also the children I coach. Professionally I was delivering talks on how to grow mentally healthy young people in schools yet on a Sunday I was seeing behaviours from adults as coaches and parents that did not support this.

This prompted me to adapt my school based presentations to reflect the need for a change in how adults coach kids and how parents support their children. Gloucestershire CB gave me the opportunity to present to the County Committee and from there in November 2018 I was invited to be the GRFU Mental Health & Wellbeing Ambassador.

Since taking up the role I have presented at a large number of clubs to both coaches and parents. I have supported clubs who have suffered the loss of a both senior and junior player to suicide and I have helped them signpost their club members to local support services.

I believe my biggest impact is in supporting coaches and parents to understand how to grow more resilience in our young people. The talks have been so successful within Gloucestershire that the word has spread.  I have now presented to clubs in Devon & Somerset as well as being invited to speak at the Cornwall coaching conference. In addition other CBs & referees societies are now inviting me to present to them. 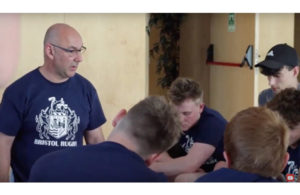 Therefore we have to grow resilience in our kids through our fantastic game by letting them develop and learn as players by playing and having enjoyment. We have to look at the national rugby survey and help clubs to focus on taking out the negative behaviours such as “shouting” “only playing to win” “not letting me play where I want to play”  and we will we go a long way to keeping them in the Rugby Family and helping build resilience.