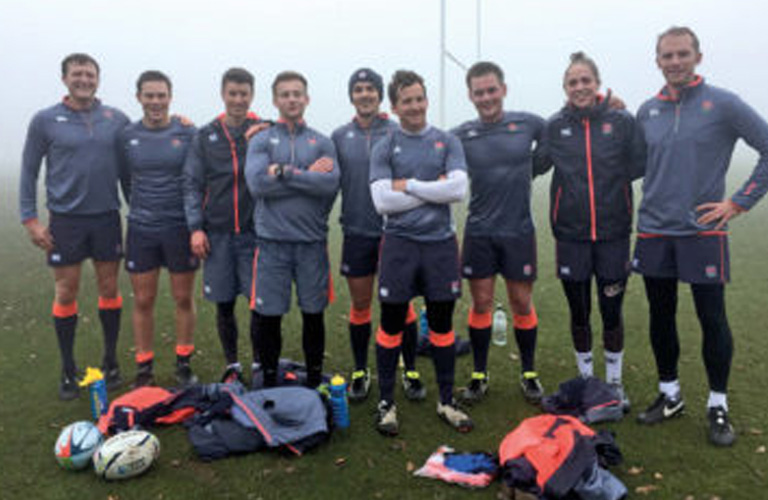 The RFU’s professional match officials were hard at work throughout November, with 24 referee or assistant referee Test match appointments, a couple of Maori All Blacks matches to officiate, and fourth and fifth official commitments. Add to this eight TMO appointments and eight referee and assistant referee commitments for the RFU’s female officials, as well as TMO commitments at two women’s Tests, and it’s clear the team has been working flat out. It’s an onerous role but they have their own specialist support to ensure that they perform at the top of their game.

Alex Reid is their strength and conditioning coach and says: “The physical demands required for the modern day match official requires some respect.

“These athletes are covering between 7–8 kilometres in a match, at an average heart rate of around 80% of their maximum, completing multi–directional, high intensity intermittent bursts of physical exertion, with changes in speed from zero to over 20km/hr.

“This, alongside real time decision making, communication with the players, the other match officials and TMO creates a requirement of physical preparedness, resilience and robustness.

“To be the best, they need to train hard and the programme in place at the RFU is perceived to be an example of ‘gold standard’ globally across other Unions. Our full time professionals commit to seven hours of specific conditioning at Twickenham on a Monday and Tuesday each week. This commitment to a healthy body, demanding physical work and resultant preparedness transfers, along with excellent technical knowledge, to an impressive presence on the pitch.

“Although a referee may be on their own in the middle of the park, what we try to create with training is a healthy team environment, a culture where each individual has a goal, and helps push and inspire each other to work hard and reach their goals. If training is uncomfortable and physically challenging, then it makes the games easy.

“They will lift heavy loads, place demands greater than 90% of their maximum heart rate upon their bodies, combine that with speed work, control and stability work, balance work, agility and reactive work, in addition to recovery, good nutrition and hydration.

“The game has developed and is quicker and more demanding for the players, and the match officials have had to move with the times and have become faster, quicker and stronger too!”

Chris Bodman gives psychological support to England’s full–time professional match officials. He says that, while working with them on systems and structures to help their communication and decision making, their own personalities are a critical part of the picture.

Pre–performance routines are as important to the referee as to the players. Chris doesn’t have a problem if they have a pre–match habit or superstition but “We try to tie down how the things they do before the game impacts on their performance and to help them use that time and energy to be the best when they are out there.”

And referees can get match nerves too. “Some nervousness may aid their performance but routines can help them get in the right emotional state to perform at their best. What affects them? A number of factors, the magnitude of the game, whether it’s on TV, if there’s been an incident with a particular team historically.”

And communication needs to be right, not just with the players but also with the team of four. “The referee needs an awareness of who he is working with, the preferred communication style of the other guys, their different personalities , basically he is the leader of that team.”

On decision making he works alongside the technical coaches. “I’ll sit in with the coach and referee when they are reviewing decisions, whether decisions were good or not and how to harvest the good stuff. Some are highly experienced and decision making is more consistent so the challenge is to accelerate that experience with the younger referees.”

“We are not looking for everyone to be the same, to create robotic referees, they need to be their authentic selves,” says Chris. “We are looking at what best practice is but also how that fits with their particular personality and style.”