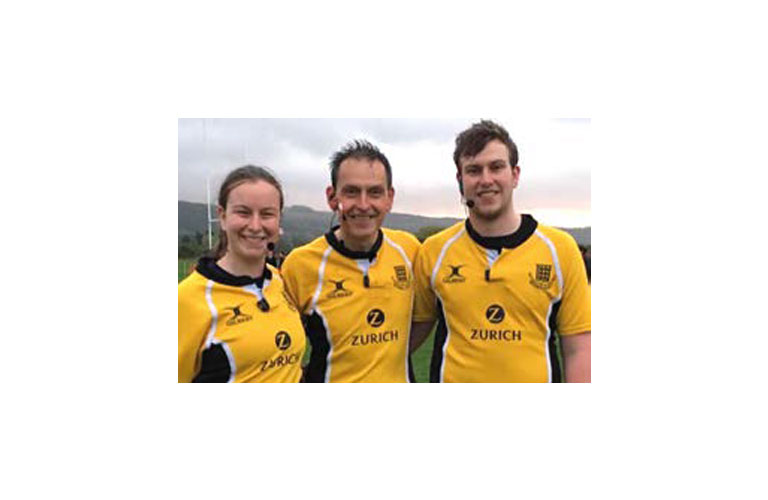 Said Fiona: “Dad’s refereeing was always a big part of our lives. It was impossible not to get a greater appreciation for the laws from watching him referee or watching matches with him. I think there was an inevitability we would follow in his footsteps, especially once he started teaching the course for the local society!”

What could be better she thought than to officiate together as a team of three. “I’d really wanted to officiate with Dad for a while and my brother made it back to Cheltenham so we could all do it together.

The main difficulty for me was trying to call him Peter and not Dad in front of the players. The true hero of the day though was my Mum who in the pouring rain and icy cold cheered us on and took the picture; a complete family effort!”

The occasion was the Cheltenham Combination Senior Cup semi-final, a close-run contest which ended Cheltenham 8 – 7 Smiths.

And for Peter: “Reffing with my two children on the line was a great experience. I was very proud of them both. This was a full on local cup semi final where the team of three had to perform to a high standard to give the clubs a platform to play to the best of their ability. Both Fiona and Alastair gave crucial and accurate calls and information during the game making sure the discussion post game was about the rugby not the officials.”