The kitchen table at the Downs’ house sees a lot of rugby action. When Rachel Downs and her friend Eleanor Dainty had to finish playing in the boys team at Under 12 their options were limited. 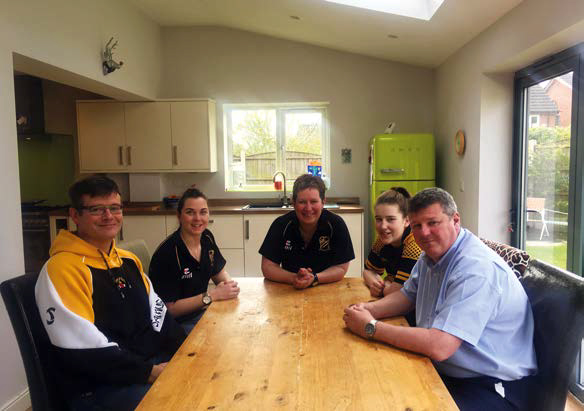 “I told Rachel that if she got a team together I would help coaching” says Mum, Jude, who also plays prop for the Leigh Ladies 15 and has coaching support for the girls from her team mate Rhianne Boag.

Rachel convinced a group of school friends to turn up to training and they loved it. They brought more girls along and numbers have steadily grown.

“Some of the girls were bringing younger sisters to training and they were also desperate to play, so we felt that we could possibly get two teams up and running, Under 15s and Under 13s” says Rhianne, “but we needed a coach for them.

“I have to admit I was a bit nervous to start with but now I absolutely love it. The girls are great and very keen.”

There are now over 30 girls training each week. The 13s have joined a few RFU pitch up and play sessions and have games under their belts. The 15s are into their second season and as well as making it to the Plate final have had five girls selected for Lancashire, two of them also selected to represent the North.

On the Sundays when there is a fixture clash with Jude and Rhianne playing for the Seniors, Rachel’s dad Mark picks up the coaching reins. As well as being the standby Under 15s coach, Mark is the Lancashire RFU Secretary.

Coaches, have you signed up for the KYBO! Video Guide to Coaching?
keepyourbootson.co.uk/video-guide-to-coaching

We think you should give it a GO!