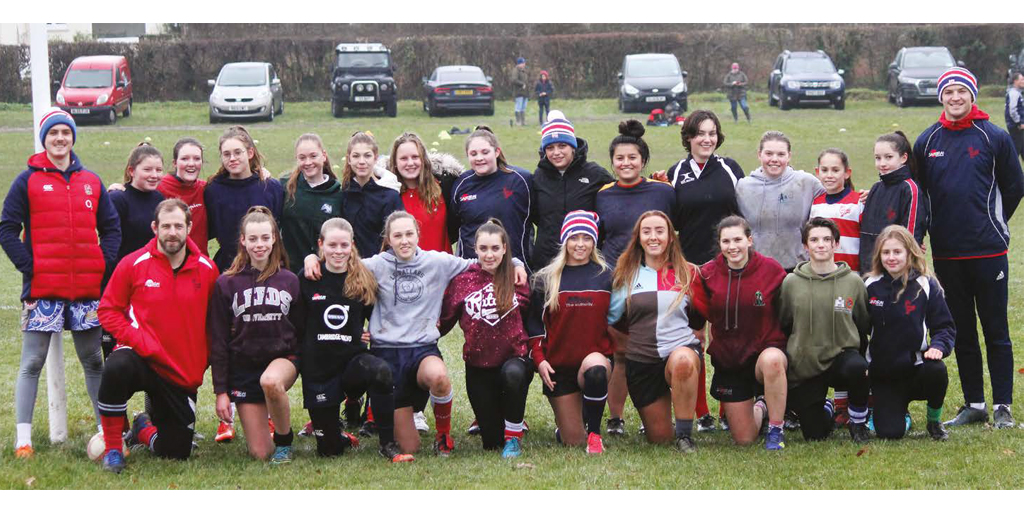 Kay attended a lunch at the club before watching the senior squad in action against Westcombe Park the week before and returned to join in a girls rugby coaching session. She spent the morning with girls from each of the club’s four age groups: U9/U11s; U13s; U15s and U18s.

The girls rugby lead coach Pip Merrett said, “Kay is a brilliant role model for the girls and her rugby career shows what can be achieved through hard work and dedication. Meeting one of the first professional women rugby players – a participant in two Rugby World Cups plus the Six Nations and 7s – has been an amazing opportunity.”

Club President, Humfrey Malins, CBE, added, “It’s lovely to welcome such a famous international player back to where she spent so many of her formative years playing and training. What a privilege for our club and an inspiration for our girls.”

A number of U15 and U18 players represent Surrey and several girls are in the U13s Surrey Development Squad.

Kay said, “There are some talented girls here, I’ve spotted a few who really stand out. It’s good to see girls’ rugby doing so well at Dorking. It’s always a pleasure going back to the club where I first played. A lot has happened since then, but Dorking is where it all began!”

DRFC Girls Rugby lead partner is Dorkingbased Mole Valley Asset Management whose support helps to drive many of the girls’ rugby initiatives. Portfolio Manager Andrew Holder said, “Professional athletes like Kay have been instrumental in making sure women’s rugby gets the attention it deserves.

We’re extremely proud of what’s been achieved at Dorking so far and excited to see girls rugby develop further.”

Highlighting the growth in girls rugby, there are discussions with the RFU to host the first ever Surrey Girls Rugby 7s competition in April 2018.

Pip, her team of coaches and some of the girls, work closely with local schools to support girls’ after-school rugby clubs. New community coaching initiatives supported by DRFC will ben launched within schools in 2018.

For more information on girls rugby at DRFC,
email girlsrugby@dorkingrfc.com