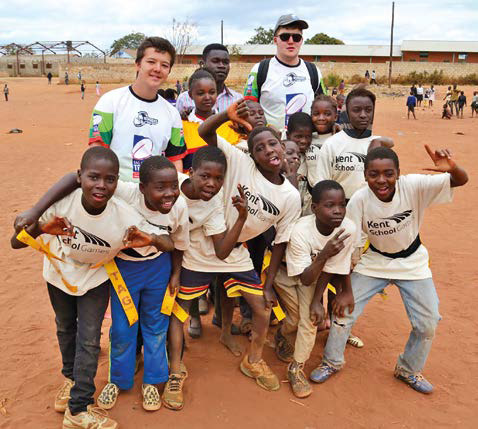 Facilitated by the Tag Rugby Trust, a charity whose byline is “Building Futures Through Rugby”, the two week trip to Lusaka and Livingstone, was part of the charity’s Young Leader programme. It saw the group not only coaching tag and delivering outreach projects in the communities, but also working and living alongside local volunteers from both Zambia and Zimbabwe. This really helped the group engage with those they were helping, breaking down barriers, building friendships, as well as sharing ideas and experiences.

With the mornings taken up with rugby, the afternoons were spent working on local community projects. These ranged from repainting schools, establishing community garden projects through to the building of additional classrooms. This experience has “opened their eyes” to some of the issues that people not in the UK face and they’ve taken the initiative to support and fund the maintenance to two water pumps in schools that they worked in.

The Ironsides teenage players have learned a great deal from this tour, including some key life skills like fundraising, presenting, first aid, coaching and the benefits of volunteering.

But the impact goes way beyond this. Benji Kona said that he’d gained confidence, learnt to adapt to different situations and surroundings, understood how doing little things can make a big difference in people’s lives, and it not to take things for granted but be thankful for what he has.

Jake Fawsett added: “The experience has helped my leadership skills as I had to run training sessions for the children. It helped me to understand different cultures and I made lifelong friends along the way, not only getting even closer with the people I travelled with but also the people we met out there.” The comment from Finlay Wright says it all: “It was the most amazing and rewarding experience of my life. I enjoyed every minute helping people as well as playing and teaching my favourite sport.”

The club hopes the young players will act as mentors and work with another team to do another tour in a year or two, building on these newly forged friendships and helping to sustain the projects this group started.

“The tour was a huge success” says Tony Oulton, one of the boys coaches. “A truly positive and life changing experience for all concerned and a real demonstration of rugby’s values at work.”

In both locations, the team planned, organised and delivered a community tag tournament that involved everyone they had worked with in the week. These were large, joyous occasions that saw well over 100 boys and girls coming together, playing tag, singing, supporting one another and having fun. Thanks to various donations, each participant was given a T-Shirt and pens/pencils
to help them at school.