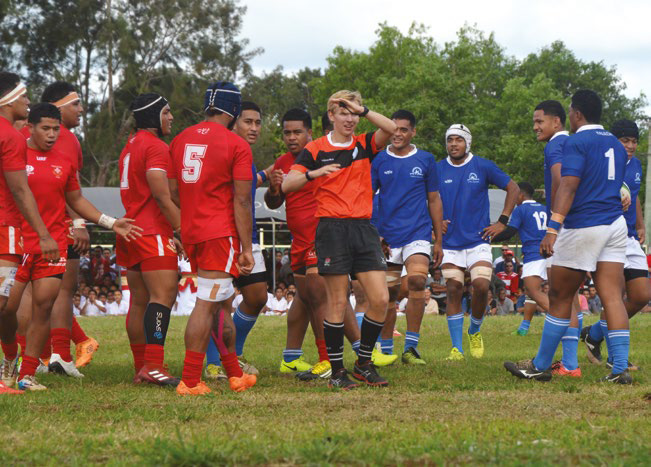 Having just transferred from the South West Referees, Nathan was on a gap year after A levels and and six months’ work experience with a local software developer, before embarking on his trip of a lifetime.

He decided to build his tour around his passion for refereeing rugby, starting with the New England Referees Society exchange with the Gloucester and District Referees Society and then continue West, throughout the USA, Canada, Fiji, Samoa, Tonga and Australia.

While travelling, and with the help of a number of his referee friends and their contacts in the UK, Nathan was able to referee 25 games, including the Samoa National Cup Final in front of 1,500 fans and the Tonga High School Final, broadcast across the Pacific to New Zealand and with almost 4,000 spectators watching. He also helped to develop a number of local referees in advancing their officiating skills in an area of the world keen to learn from a tier one nation.

From school games to Cup finals across thousands of miles, from a four-day train ride and many overnight bus rides, the highlights included: cycling San Francisco’s magnificent hills, swimming with whales in Tonga, visiting the Tu Sua Ocean Trench in Samoa, and enjoying Melbourne’s melting pot of culture and the many different styles of rugby along the way.

Although Nathan’s refereeing was certainly developed, more importantly he developed and grew as a person, building lifelong friendships across the globe and even managing to celebrate his 19th birthday in Apia, Samoa, a long way from his Gloucester roots. He’s already planning more referee trips for the future.