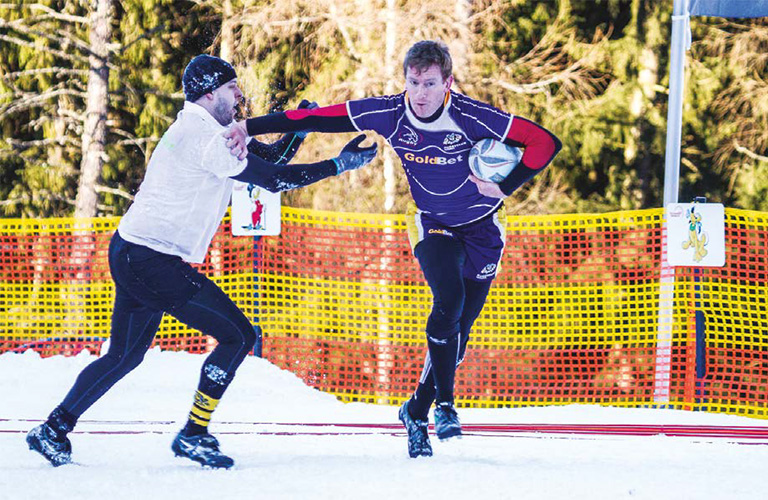 3.30am every day in Innsbruck, a city in the west of Austria, rugby coach Jim Crick can be found cycling the six miles between his house and the first job of the day.

“I have five jobs here to keep me going,” says 28-year-old Crick. “The first is unloading barrels at a depot. I do that for three hours every single morning while everyone else is asleep.”

With the first job out the way, Crick cycles back in temperatures below freezing to begin the rest of his day.

“The second job is at a kindergarten, followed by a few hours of childcare and in the evenings I do security work at nightclubs. I get about four hours of sleep a night.”

It is a gruelling schedule and a long way from Essex and East London RFC where Crick’s journey began.

“When I was growing up I played football and pretended to enjoy it,” says Crick. “I didn’t discover rugby until I was a teenager and I was blown away by how welcoming the club was. They took me in with open arms and I never looked back.”

Crick continued playing for the club for the next few years while qualifying as a personal trainer but after going through a difficult period in his life, Crick found himself without a job or home and decided to pursue coaching, gaining his level one and two qualifications.

“I was at a pretty challenging stage and that’s when I turned to rugby more than ever. It’s at those times when you turn to what means most to you. My dad helped me massively and the rugby family were a big support too.”

The coaching qualifications gave Crick the opportunity to travel to Brazil where he worked for a year coaching rugby in local communities.

“I had an amazing time coaching over there and doing outreach work but I didn’t feel I was testing myself enough, so I accepted the role of head coach at Innsbruck Rugby Club,” says Crick who has now been in the job for over a year.

The club compete in Austria’s top domestic league and are currently vying to become champions for the first time under Crick.

“It is a great experience to coach a team of this standard. I have to do all the other jobs to give me enough money to live out here but it is worth it to be able to coach at a club like this.”

“It doesn’t feel like work to me. I have an obligation to coach rugby, it has given me so much and so I feel like I owe rugby something. That’s why I’m doing this. That’s why I am working so hard, I kind of think I have a duty to help the game.”

Crick has recently submitted his level three coaching application and while growing the game abroad is his passion for now it can’t be long before this incredibly driven coach comes home to put what he has learned into practice here.

Coaches have you signed up for the KYBO! Video Guide to Coaching?

We think you should give it a GO!