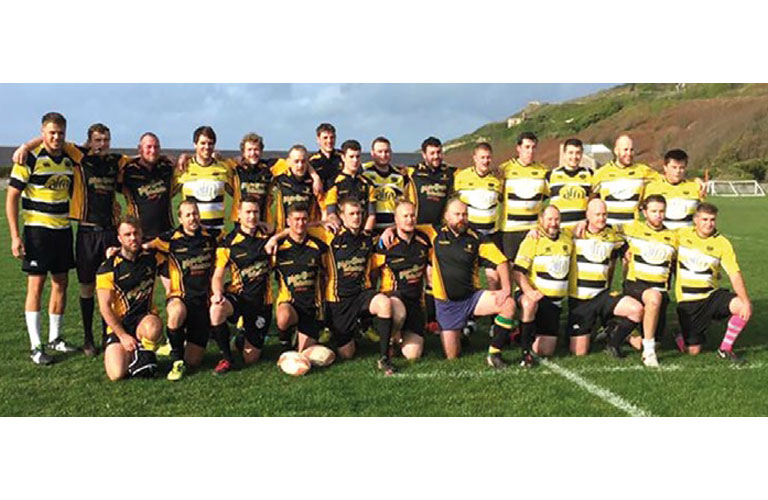 More than 20 players have been training regularly twice a week ever since, with their first game, a ten a side match, against a social side in Sark last August. Despite a 25-10 loss they were encouraged by the performance, especially as many of the team had never played before.

The long-awaited first ever home game for Alderney Rugby Club took place on a bright and sunny afternoon last November in front of a sizeable crowd at the Arsenal pitch which, thanks to the generous co-operation of the football club, was converted to accommodate rugby.

With the opposition, Casual AF, having only 13 players (including Alderney’s Dean Chandler), the captains agreed on a 10-a-side game of 20 minutes each half. Facing a much larger side, the Ridunians held their own and enjoyed early possession. After only four minutes local PE teacher David Adams scored the first try on home soil and added the extras to provide a 7-0 lead. The rest of the first half was very even but the superior fitness and speed of the Ridunian side eventually saw a breakthrough with Joe Burland scoring to give The Alderney side a 12-0 half time lead.

The second half saw Alderney starting to dominate and, with Dan Le Poullain proving a Colossus in the lineout, greater possession and speed of the backs saw the game go more and more the Ridunians’ way. Three more tries were added, without reply. On 17 minutes Jordan Shaw, followed by David Adams again on 20 minutes and finally Jordan Clay on full time, all converted by Adams. The game ended 33-0 to Ridunians.

Match sponsors The Campania awarded the man of the match to Joe Burland and Casual AF selected David Adams for their award and the club were presented with a cheque for £300 from the Rotary Club of Alderney.

The club were very grateful to the Rotary Club, the football club and the huge amount of support on the day and they are looking forward to more games in the new year. While still very much in a developmental phase, they are looking to play teams of a similar nature. Alderney is a very scenic island with the pitch set near the sea and overlooked by iconic Victorian forts. It is a very friendly and sociable destination with the 3 mile by 1 mile island often being referred to as “2000 alcoholics clinging to a rock.”

They would be pleased to welcome any sides, especially at the end of the regular season, who would like to play a friendly or take part in mini tournaments.